Critically Endangered Black Macaque Population in Sulawesi on the Rebound

While most reports of critically endangered species continue to break the hearts of wildlife and nature enthusiasts, there is one critically endangered species in Sulawesi making a comeback! Black macaques, otherwise known as the ‘gorilla of Indonesia,’ are reportedly showing signs of recovery after experiencing a decline so devastating that experts thought they would disappear.

“Fifteen years ago it looked like this macaque population would continue its decline and eventually disappear,” Randall Kyes of the University of Washington, lead researcher on a study published in the January issue of American Journal of Primatology, said in a statement to Monga Bay News.

Habitat destruction played a big part in the decline of this particular monkey species, but hunting was also a factor. They are seen as a delicacy by the locals. However, that view may have seen a slight shift, and may continue to do so because of the large surge of tourists coming to see the myriad of unique animal species in the Sulawesi rainforests, one of them being the black macaques. In fact, the tourism surge has been so big that locals have now started to consider tourism as an important source of income, which enforces the idea that the macaques serve a purpose bigger than simply a source of food. 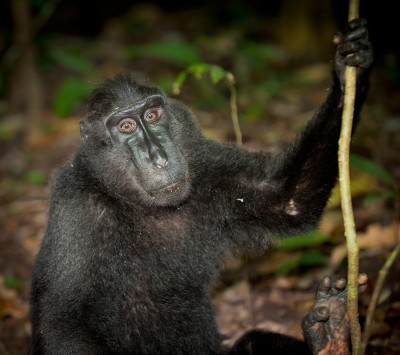 “We’ve found that the progressive decline has slowed,” Kyes said. “Somewhere over the last 10 years, the trend has started to turn. We’re seeing the population in the balance now.”

However, Kyes warns that the species is still under careful watch and that this new discovery shouldn’t be taken as an excuse to forget about preserving its future. In fact, the numbers are still markedly lower than historical levels; a 1978 study found that there were 10 groups and 300 individuals per square kilometer.

“It doesn’t mean that everything is fine now and that we no longer need to worry about the fate of these animals, but it is good news compared with what we’ve seen over the past 30-plus years in this reserve,” Kyes said. “Without the sustained efforts by local and international groups working in the reserve and the support and involvement of the local people, the macaques will likely face further decline.”