HomeBlogZooMan Jumps 20 Feet to Fall into the Tiger’s Den...

In a bizarre incident a man jumped out of a monorail at the Bronx Zoo and landed straight into the tiger exhibit on Friday. The man was badly mauled before zoo keepers rescued him using fire extinguishers.

25 year old David Villalobos put his own life at risk when he jumped from the monorail at the zoo and landed directly into the wild cat’s den. 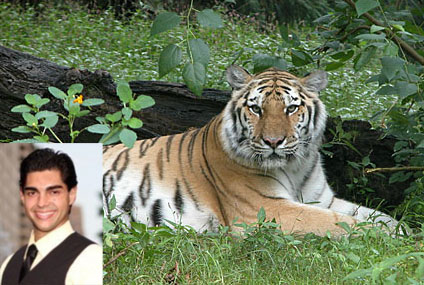 Bronx Zoo Director Jim Breheny said the tigers could have easily killed the man if not for the zoo workers.

“[He had] various bites or puncture wounds on his arms and legs and also the top of his shoulder on his back,” said the director.

One of the Siberian tigers had fiercely pounced on the intruder and could have killed him. But the zoo workers arrived immediately and asked David to roll under a hot wire to safety after the tiger had backed away a little.

The tiger was then called by the keepers to the exhibit area where it was locked.

The emergency medical team reached the scene and tended to David’s wounds. He was later taken to Jacobi Hospital in critical condition.

Breheny says that the man jumped almost 20 feet and landed in the den. The tiger was behaving naturally to an outsider and he says that it did nothing wrong. The animal will not be put down.

Authorities however are not certain why David leaped that way. His facebook page shows ‘Mother Earth’ as his religion and has many animal pictures. David worked at Bond New York, the real estate firm a few months ago and his co worker say that he was a ‘good guy’.

Bronx Zoo’s history of animal mauling and leading to fatal injuries has been quite rare.

In 1985, a zookeeper, Robin Silverman, 24, was killed when she was attacked by two Siberian tigers at the Bronx Zoo while trying to clean their cage.

In similar zoo incidents an 11 year old boy was killed in 1987 by a polar bear at the Prospect Park Zoo after climbing into its enclosure when the zoo was closed.  Also in 2007 a man was killed on Christmas day at the San Francisco Zoo, when a 300-pound tiger named Tatiana escaped its cage.