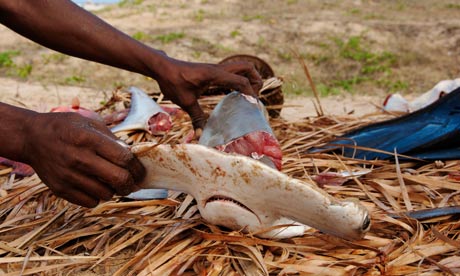 For Fernando Nhamussua living near the Mozambique coast, sharks are not something to be feared but an extremely profitable source of income. The 33 year old has sold 20 shark fins so far and even as the world contemplates ban of the illegal trade, Fernando’s basket is full of four dried shark fins.

The man admits to reporters at the UK’s Guardian, that he sells these fins to the Chinese, estimating that a kilogram’s worth will fetch around 5,000 meticals (£104).

“We take them to town where there is a place for Chinese buyers. It’s good money.”

From the profitable income, he hopes he can save enough for the future and build a modest but concrete home.

Fishing has always been one of the only source of income for the locals along these coast. But lately the Chinese have been supplying improved fishing nets, buying shark fins and manta ray “wing” tips and shipping them back to Asia, where there is increasing demand for delicacies such as shark fin soup.

Local conservationists fear that this trade is threatening the manta ray towards extinction.

Americo Gilamba, Fernando’s nephew who is 19 years old says how this is the only way they can ensure a livelihood.

“We do it because we don’t have a good job. We know it’s not good and the Chinese are killing things that are not allowed to be killed, but we do it to survive and get some money. We don’t want to have to steal from other people. If we were given an alternative, we would stop.”

Inhambane’s beaches are famous for teeming with marine life. Divers from around the world visit, fascinated by these creatures and if the present hunting continues, it may also threaten tourism.

Carla Victorino Guicome, who last year became the first Mozambican woman to qualify as a diving instructor, tell the reporters,

“I am sad, I am angry because if it continues like this it’s going to kill tourism in Mozambique. No more tourists will come here. People come from all over the world to enjoy diving with sharks and manta rays, but if this goes on, they won’t be there any more.”

“The Chinese don’t respect marine life and they’re trying to destroy our heritage. We have tried and tried, but the government don’t seem to be doing anything to stop it. If nothing is done, the animals will disappear.”

Banning of gillnets, improved education and alternative livelihoods are some of the proposed changes asked by conservationists but fishing cannot be totally stopped as it is a powerful industry.

“I would argue that far more people benefit from tourism here than from the fishing industry. The economic argument for preserving these charismatic animals in the long term surely outweighs a one-off profit for a few fishermen and Chinese.”

Mozambique’s coast is one of the few places in the world where Manta rays are found. Inhambane has one of the biggest populations in the world, with 908 known to the foundation, but has witnessed an 87% drop in the past decade. Therefore the chances of a diver witnessing a manta ray in the ocean waters have diminished too.

Marshall, principal scientist for the manta ray programme, said: “We’re looking at decimation in the next decade or decade-and-a-half. Manta rays are in big trouble along the coastline. If current trends continue, I don’t give this population more than a few generations.”

She adds that the fishermen have better fishing nets and equipments now thanks to government schemes and Chinese aid. This makes it all the more easier for them to catch the rays and sharks.

“It’s a very secretive operation, but we’ve had confirmation of the Chinese buying and shipping them out. There are containers that are just reeking. Everyone knows who owns those containers, but nobody does anything.”

Many Chinese are living in the region for legal businesses, but it is feared that some do trade in shark fins discreetly. There are other trade links that have also been discovered.

The Environmental Investigation Agency has said nearly half of the timber exported from Mozambique to China is done so illegally, costing the impoverished nation tens of millions of dollars a year.

When the UK based newspaper reporters visited a Chinese shop said to be doing illicit trade in marine life, the owners claimed that the trade ad declined.

Lon Chen, another resident of five years and owner of a supermarket in Inhambane, claimed that he been offered such items in the past. “The local people kill them and bring them,” he said.

“They came here to ask if we needed it or not. I said no, but some Chinese are buying that kind of food. They don’t eat it at all; they are buying it to export to Asia. It’s their business and they’re surviving on that.”

Mozambique authorities do take the problem seriously but are stranded with limited resources. There are only two patrol boats available to cover the immense coastline.

Carlos Carvalho, an activist based in the capital, Maputo, claimed that sea turtles and dolphins are also being targeted for their flippers and organs. He also adds that Chinese traders are planning to supply boats too to the fishermen.

“The Chinese are gangsters and they have the protection of certain officials in Inhambane province,” Carvalho said. “Every month it is escalating. Inhambane is out of control. It is the killing field of Mozambique and nobody is doing anything about it. It absolutely devastates me.”

Timothy Dykman, director of Ocean Revolution, said: “It’s about the markets, conditions and global impacts far beyond the control of local fishermen that are being run by organised criminal networks. Networks are also selling drugs and engaged in human trafficking.”

Mozambique’s coastline is under serious threat.