HomeBlogMarinelifeFined for Saving A Baby Seal!

Fined for Saving A Baby Seal!

A Massachusetts couple has had to pay a big price quite literally for what they thought was a good deed. The two saved a baby seal last weekend and now face a fine of 5,000 dollars as fine!

Mark Hodgdon and Mary Johansson from Weymouth, Massachusetts were scuba diving in Marshfield beach when they saw a baby seal covered with bite marks.

In order to help the animal, they brought it to the beach and called a volunteer from the New England Aquarium.

The volunteer however decided not to even touch the seal after he arrived. The couple returned it back into the ocean and now face fine as they have violated the Marine Mammals Protection Act.

The couple insists that they tried to help because they believed the seal was in danger. It struggled to keep its head above water and could not breathe, they say.

Hodgdon says, “As I got a little bit closer, he just swam closer to me and jumped right up on my shoulder.”

He thought that the seal had been attacked by a shark because of the bite marks across its body.

He added, “You could just tell his whole body was in the shark. It had to have been.”

Mary has the whole incident recorded in a video including the moment when the seal seems to kiss Mark on his nose inside their raft.

The couple says the volunteer was not as worried about the condition of the seal pup as they were.

“He turned around and asked me, ‘How do you know he’s really hurt, did you take an X-ray?’” says Mark.

“They’re supposed to be there to help these little animals and they did nothing, nothing. It breaks my heart.” 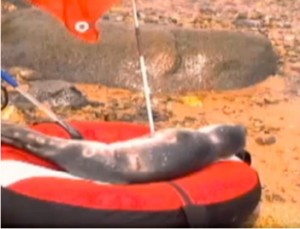 A spokesperson from the Aquarium however sees the incident differently.

“We try to not intervene with animals that don’t require rescue. This particular seal pup is right on that line in terms of doing that, but the trained staff that we had sent down there made a decision that he didn’t merit that intervention.”

Mary says that the poor baby seal probably drowned while they too now face a fine of $ 5,000.