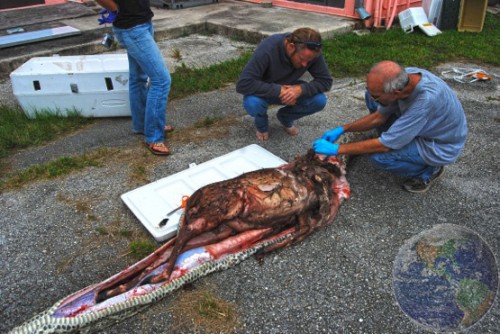 A massive Burmese python was found, and killed, by workers in Everglades National Park in Florida late last week.  The python measured a Florida-record 16 feet and weighed 215 pounds when the workers shot it with a shotgun.  While Burmese pythons are normally found only in Southern and Southeast Asia, a growing number are being found in Florida.  This is either caused by pet owners releasing their pythons into the wild when they no longer want the snake or it becomes too large, or snakes that accidentally got loose during Hurricane Andrew in 1992.  Many of these newly emancipated snakes migrated to the Everglades, where they have been reproducing at such an alarming rate that they are now classified as an invasive species.  They are preying on endangered birds and alligators and creating havoc on the Everglades’ ecosystem.  Hence why the National Park workers shot the python they found last week.

What made the discovery of this particular python last week so unique, besides its record-breaking length, is what was found inside the python when it was cut open.  Apparently the snake had just finished enjoying a nice, big meal.  So what was on the python’s menu, you ask?  Try a 76-pound female deer!  The deer was still in one piece when discovered inside the python.  Now that’s what you call an invasive species