HomeBlogFeaturedLondon Zoo Welcomes The Media for Their Annual...

London Zoo Welcomes The Media for Their Annual Animal Census

It seems such an odd thing – a zoo counting their animals annually to ensure that they’re all still there. But that’s exactly what the London zoo was doing when they welcomed a new species – the photograph “snappers” – or, in more common terms – the press. This strange, new animal species seemed to enjoy their short visit, but their presence was definitely an adjustment for the zookeepers who are more accustomed to their furry, winged or scaly friends – some of which also seemed to be a little uncertain of how to take the visitors that day.

Jull, a red-kneed bird-eating spider (or tarantula) wasn’t quite sure what to think about the photographers at first. One asked if the handler, Amy Callaghan, could put Jill on the clipboard so he could get a better photo.

“I don’t want to stress her out too much,” Callaghan said. But eventually, Jill warmed up and calmed down. “She’s fine now. You get warning signs if there’s a problem. She’ll flick her back legs if she’s unhappy.”

The meerkats (11) were probably the most popular that day. Photographers asked keepers to move so they could get better pictures.

But right next to their habitat sat the lonely otters (9).

“It’s all about charisma,” Amy Harris, the zoo’s media manager told The Guardian UK. “Some animals just have it, and the best way to judge is to look at children’s faces when they first see them.” Of course, counting the number of lenses pointed could count just as well as the faces of children…

Probably the most unruly of the animals that day, the black-capped Bolivian squirrel monkeys (23), refused to stay still for the cameras. They ran about along the ropes at the top of their enclosure and even threw things down onto the photographers. 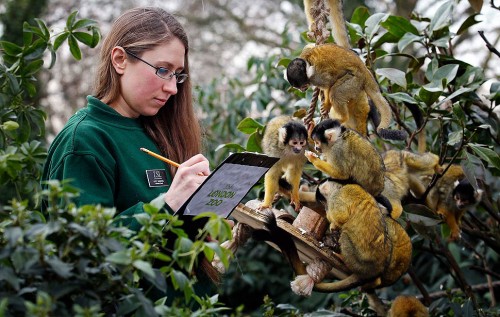 “They’re usually very good,” their keeper told the reporters, “but they’re a bit freaked out at the moment.”

The penguins (52) didn’t behave much better. They refused to stand next to a naff sign that said “Line up here to be counted,” and the photographers had a difficult time snapping pictures of them. 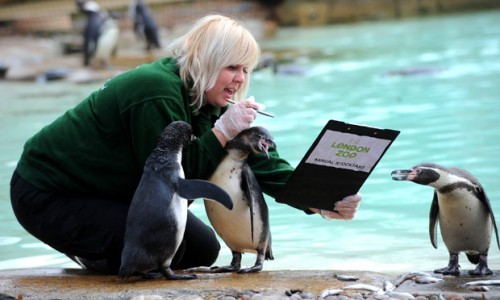 “They’re all buggering off,” said one photographer as the penguins lost interest in the fish being thrown at them. But at least the snappers were able to get one decent photograph as one penguin decided to try and eat its keeper’s clipboard.

But not all species were difficult to count because of behavior. Others were difficult simply because of the way they are. Fish, for example, won’t stop swimming just so they can be counted. In this instance, photographers come in handy; keepers take a photograph of the tank and then base their count on what they see in the photo. Equally as difficult to count as the fish, partula snails, which are camouflaged and hidden underneath the leaves, have to be counted exactly correct because they are critically endangered.

“We’ve got hundreds,” zoo director, David Field told reporters. “But they’re an incredibly endangered species so we count them individually. We are looking to reintroduce them into the wild, and knowing the precise number we have is crucial.”

But they draw the line at counting the leafcutter ants.

But does the zoo really need to count their animals? Wouldn’t they KNOW if they lost an animal or two?

“We might sometimes find that we’d got one individual which we thought we’d moved somewhere else, so the individual identifications can sometimes differ, and we might find counts differ with the odd invertebrate and fish species,” Field said. “But when you’ve got things like the penguins and some of the larger species like our gorillas (3), we don’t tend to lose those.”

“They’re regularly counted,” Harris said, “but under the terms of our license, we have to do an official count once a year…Every day the keepers do their daily checks so there shouldn’t be any shocks.”

And, according to Lucy Hawley, a keeper in the rainforest section, most of the animals are microchipped. During the count, most of the chips are checked…well, except for the animals that move too fast to be counted (like the Asian short-clawed otters). Sloths, on the other hand, are perfectly fine with having their chips checked.

“They’re fine,” Hawley said. “As long as you give them something to eat and tickle their tummies.”