Loose Lemurs in Miami Beach Give Police Force the Run Around

When it comes to nabbing the bad guy or responding to calls on unruly citizens, officers from the Miami PD know exactly what to do. When it comes to handling calls about unruly primates, well…let’s just say they received some on the job training.

“I have never in my 17 years,” North Miami Beach Plice Sgt. Richard Rand told NBC News. “This is the first time I’ve ever been dispatched to a call like this.”

Early Monday Morning, the Miami police department received a call about lemurs running lose in South Miami. Reportedly, they had attacked a two-year-old girl getting out of her car. She suffered a scratch to her face, but was otherwise found to be perfectly fine.

“Fire-Rescue treated her immediately. She appeared to be in good spirits,” Sgt. Rand said.

The owner of the lemurs, Julia Hincapie, said that the lemurs, for which he reportedly has a permit to keep, are usually in cages in his backyard. Hincapie told officers that someone broke into the cages and tried to steal them, but they ended up getting out and running loose. 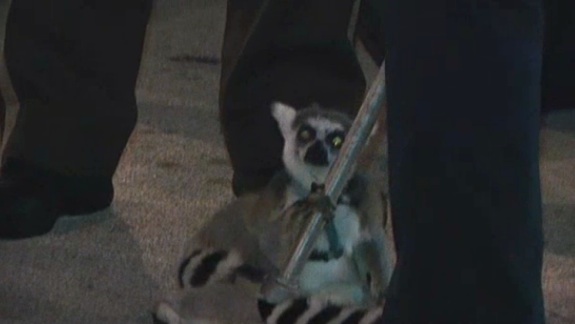 Officers were able to capture some film footage of the lemurs as they hopped around the neighborhood. One even jumped onto a patrol car, giving them an amazing shot at the actual capture of the feisty primate. Eventually, they were all captured and returned to their owner. The Florida Fish and Wildlife Conservation Commission, also at the scene that morning, will continue to investigate the matter.

As far as the neighbors are concerned, it doesn’t seem that anyone is directly opposed to the monkeys being there. And it would seem that Hincapie’s statement about the lemurs simply being scared holds up. Carlos Lezcano, one of Hincapie’s neighbors, gave NBC news an official statemtn.

“There’s nothing wrong with the monkeys, they’re very peaceful, we feed them and everything,” he said. “Like any other animals around, we get raccoons, we got cats, we got every kind of animals around here, which is beautiful.”