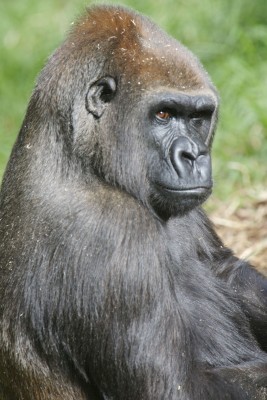 In 2008 the world was stunned by the news when Wildlife Conservation Society (WCS) accidentally discovered a remote swamp forests in northern Republic of Congo contained a stunning population of 125,000 western lowland gorillas. Now, the newly created Ntokou-Pikounda National Park will finally ensure that this haven for the apes remains protected for the future.

When WCS made the discovery in 2008, At the time the President of WCS, Steven E. Sanderson, called the area the “mother lode of gorillas,”. He hoped that this chance sighting would help in creating a new park for the apes.

The Ntokou-Pikounda National Park that has now been created spans almost 4,572 square kilometers (1,765 square miles) and will safeguard western lowland gorillas as well as elephants and chimpanzees. It is home to 950 chimpanzees, 800 elephants, and some 15,000 lowland western gorillas, the core population of the apes.

“The creation of this new protected area is part of our policy of conservation and sustainable management of the most representative ecosystems in the country,” said Claude Massimba, the director of Wildlife and Protected Areas for the Republic of Congo.

Congo as a nation is still struggling from high poverty rates but it has still managed to reserve 11 percent of its land as protected for wildlife which will not be affected from development activities.

Deforestation, poaching for bush meat and diseases have affected the rare Western lowland Gorillas in the last few years. They are currently listed as Critically Endangered by the International Union for Conservation of Nature (IUCN).

The chance discovery of the 125, 000 gorillas in 2008, actually helped in doubling the population of the species almost overnight.

“This new park is wonderful news for gorillas and for conservation in Central Africa,” said John Robinson, WCS Executive Vice President for Conservation and Science.

Hopefully, the gorillas will continue to live safely in their newly protected habitat.