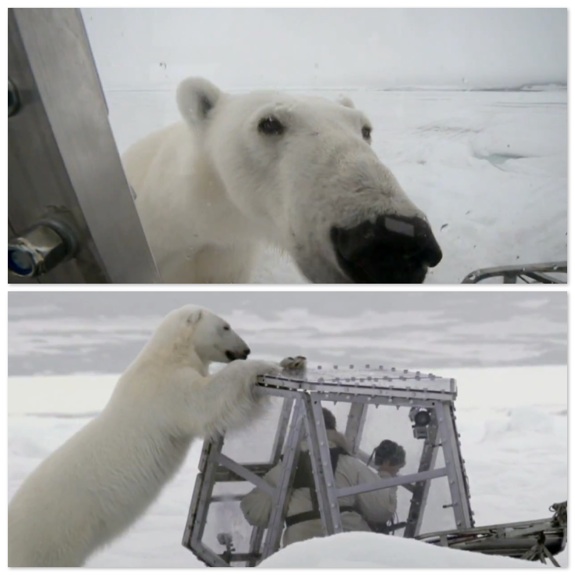 For those of us that have never seen a polar bear in real life, there’s an image of a beautiful, majestic but slightly snuggly creature. While the majestic and beautiful portion of that image may be true, polar bears are far from snuggly. In fact, these endangered animals are one of the most powerful on the planet, and they are one of the few species that would devour a human for food.

Scottish cameraman, Gordon Buchanan, was well aware of the risks when he and his team decided to film polar bears in the northernmost part of Norway, Svalbard. This is why they took every possible precaution; they developed a safety pod, a protective enclosure with a role similar to that of shark cages. Named the ice cube, the pod would enable some up close and personal filming for Buchanan. He got his footage, but he probably never imagined how frightening the experience would be. 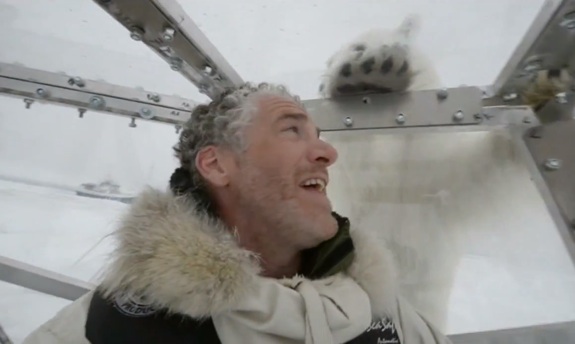 “She’s coming closer and closer. Oh my God, she is enormous,” Buchanan said in the video as the bear approached the pod. “Really this is why I’ve come here. To see these animals, to get to understand them, to see them up close…She’s right here. Hey bear.”

The female polar then started to analyze the pod from just a couple of feet away. She used her nose, which Buchanan says is thousands of times stronger than his own, to try and determine which attack approach to use.

She found that Buchanan’s sent was strongest at the door, where there was a small gap. Ironically, this was also the pod’s weakest point.

“She can sniff me, God. I could have actually touched it’s nose,” Buchanan said as the bear put her nose up to the opening.

She had now planned out her attack, and she was definitely determined to get inside that pod and snag a meal for herself and her cubs. She clawed and bit at the pod, trying to find a way to pry it open. When that tactic failed, she started shaking the pod so vigorously that Buchanan seemed to be struggling to stay upright. She continued to try and find a way in for nearly 45 minutes.

Thankfully, Buchanan is okay. He made it out, thanks to his protective pod. But this experience just goes to show – while very beautiful and fun to admire, wild animals can and often are dangerous.

Buchanan’s video will appear in “The Polar Bear Family and Me,” a three-part series for the BBC.