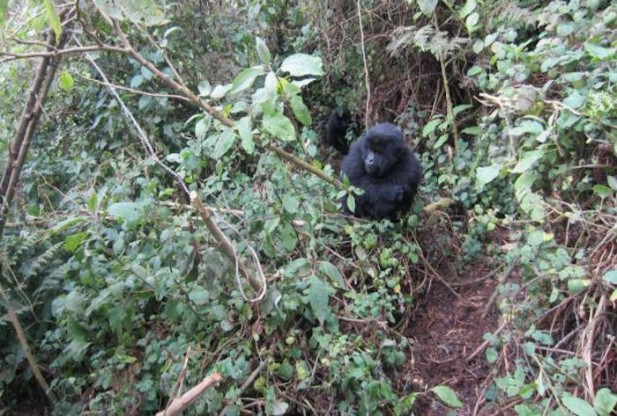 Need further proof on how smart and evolved gorillas are?  Recently in Rwanda’s Volcanoes National Park, a group of young mountain gorillas were spotted searching and destroying poacher’s traps.  Conservationist John Ndayambaje of The Dian Fossey Gorilla Fund International was about to undo a poacher’s snare (consisting of a hidden noose tied to a tree and pinned to the ground) when a group of gorillas ran over and chased him away.  Then a couple of young mountain gorillas, Dukore and Rwema, swooped in and took apart the trap.  Then the searched out more snares in the forest and did the same.

“We have quite a long record of seeing silverbacks dismantle snares,” Gorilla Fund spokesperson Erika Archibald told The Daily Mail. “But we had never seen it passed on to youngsters like that.  (The gorillas moved with) such speed and purpose and such clarity … knowing.”

The poacher’s traps aren’t intended to snare gorillas – antelopes are the main target – but gorillas do get caught up in them.  And it can be deadly for young gorillas, who aren’t big and strong enough to escape.  In fact, one of Dukore and Rwema’s young relatives was killed in a trap recently, which the researchers think is what has led the young duo (along with a third young gorilla, Tetero) to go on their search and destroy mission.

“Chimpanzees are always quoted as being the tool users, but I think, when the situation provides itself, gorillas are quite ingenious,” Mike Cranfield, executive director of the Mountain Gorilla Veterinary Project, told Red Orbit.