HomeBlogFeaturedChimps get Pregnant even after Vasectomy 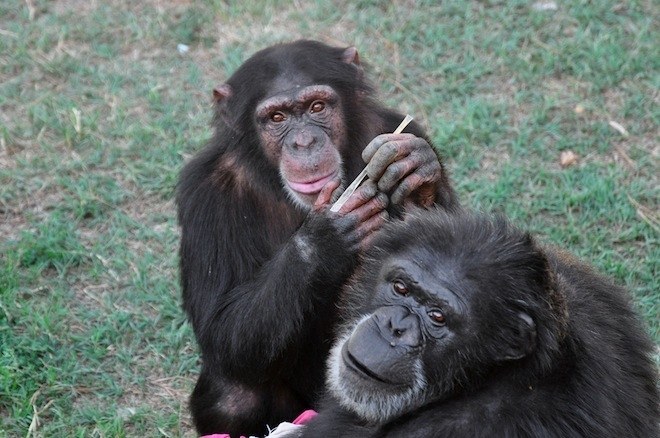 Chimps get Pregnant even after Vasectomy

There is a new baby chimp at Chimp Haven Inc. facility near Shreveport in northwest Louisiana and while the news is wonderful, what makes it surprising is that the birth occurred after all the males went through a vasectomy.

The first surprising birth was noticed by a worker on Valentine’s day when 29 year old Flora, was seen carrying a newborn. As Chimps like to carry things around, the workers initially thought that it was a stuffed toy in her hands, but later they realized it to be her baby when they saw a foot!

The sanctuary is like a retirement home for old research chimpanzees. According to the sanctuary director Linda Brent every male chimp undergoes a vasectomy before being sent to the facility as they already have abundant number of captive chimpanzees to take care of.

The birth was so surprising that all the other seven female chimps were immediately given pregnancy test and this led to the revelation that 49-year-old Ginger was pregnant and due in late July or early August.

The male chimps that have been snipped twice include Conan after he was identified as the father of a baby born in January 2007. The other one was a chimp whom they were not sure whether he had undergone the surgery or not.

The main reason behind these surprise pregnancies seems to be the fact that chimps are able to grow back the tube that carries sperm from the testicles, even though veterinary surgeons cut out about 3 inches of each tube and close the ends, says Linda.

“We don’t know if that’s the case here or if the original vasectomy hadn’t been done as well as it could be,” she said.

She added that the females are all now on birth control till the males can be operated upon again.

For the males too the next round of surgery will be a more complex procedure developed in another sanctuary with hopes that the tubes will not grow again.

The recent surprise addition has not yet been named and the sanctuary is holding a contest in March to do just that. It is also not yet known as to which of the males is the father of the young one.

Chimp Haven was opened in 2005 as a haven for Chimpanzees retired from medical and scientific research. It began with housing 31 animals and now has 132 chimps in 18 groups, and room for nearly 70 more animals.