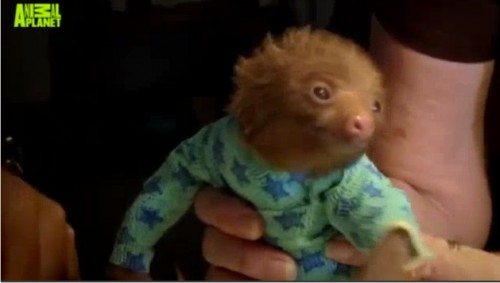 Two orphaned sloths at a sanctuary in Costa Rica have been saved in the most unusual way. To save the babies from parasitic mites, they have been dressed in bandages that look like cute little ‘onesies’.

Like the adorable animated mouse, Stuart Little, the sloths also look like they are all ready to be tucked into bed in their pajamas. But the purpose of bandaging their entire body was actually to prevent parasitic mites from harming them.

The twins are orphans and have been suffering from a skin infection called mange caused by mites that hide under the fur and the skin. As the sloths lack the added protection of the antibodies provided by mother’s milk, the sanctuary owner Judy Avey-Arroyo devised this unusual technique to prevent mites from attacking them.

Judy first shaved off all the fur so that the mites could be removed. She then applied a balm made of sulfur and lard on the entire skin of the two baby sloths as a home remedy. This helps smooth the skin and remove any remaining mites. To prevent them from licking away the medicine she then swaddled colorful bandages all around their body.

The baby sloths do not seem to mind the lack of fur and their new functional pajamas. They were seen comfortably cuddling each other, like all orphan sloths naturally do.