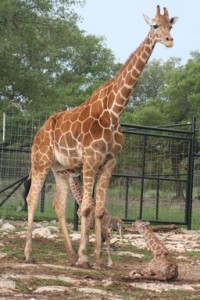 There was double the excitement earlier this month when the Natural Bridge Wildlife Ranch in Texas welcomed twin Reticulated Giraffes!

Currently the only living set of twins and the second reported set of living twins born in the United States, the bundles of joy were delivered on May 10, 2013. The first-born female calf, Wasswa, weighed 95 pounds and was 4.5 feet tall. The second-born male calf, Nakato, weighed 125 pounds and was 5.5 feet tall.

The twin giraffes were the 19th and 20th giraffes born at Natural Bridge Wildlife Ranch, a 400-acre animal preserve. In operation since 1984, the ranch’s successful breeding program spawned the twins’ mother, Carol. Born in 2005, Carol was the 12th giraffe born at the ranch. Caretakers at the ranch and ranch veterinarian Dr. Kenny Patin have been on high alert since the twins’ birth, providing around-the-clock monitoring to assure the twins’ health and vitality. 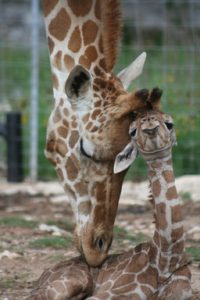 Male twin Nakato has been hand-reared since birth to ensure he receives adequate nutrition. Nakato is being re-introduced to his family through short, supervised visits to assure the mother does not perceive him as a threat. The twins are the mother’s third birth. “As twin births are rare, we had a concern that the mother would not be able to produce enough milk for both offspring,” said Dr. Patin. “We wanted to take prudent measures to guard the twins’ health.”

According to Laurie Bingaman Lackey, giraffe studbook keeper for the Association of Zoos and Aquariums, the twin giraffes’ birth is the second set of living giraffe twins in the US and the ninth set of living twins born in the zoos of the world. A set each have also been born in Canada, Germany, the Czech Republic, England, France, and 2 sets to the same dam in South Korea. Since the 1830s there have been over 8,000 recorded giraffe births in zoos worldwide; the twins’ birth at Natural Bridge Wildlife Ranch are the 31st recorded set of twins. Three-quarters of twin pregnancies abort early in gestation or are stillborn. Only 9 sets of twins have been reported living at birth. 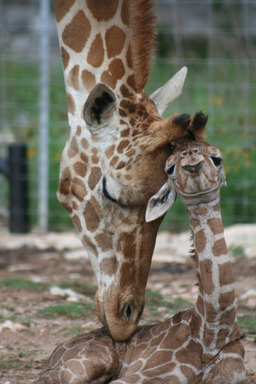 There are eight giraffes residing at Natural Bridge Wildlife Ranch, including the twins’ father Marshall. Marshall is 10-years-old.

The average giraffe gestation is 15 months. Giraffes give birth standing up. Calves fall 6 feet to the ground, and stand up and run within an hour of birth. Giraffe calves are reliant on their mother’s milk for up to 9-12 months. Giraffes are the tallest living land mammals with average height ranging from 16-19 feet.

“Natural Bridge Wildlife Ranch has been operated by the same family for generations and they are a big part of the New Braunfels community,” said Judy Young, New Braunfels Convention and Visitors Bureau Director. “They take amazing care of their animals. It’s definitely going to be double the fun to visit this summer and watch Nakato and Wasswa grow.”