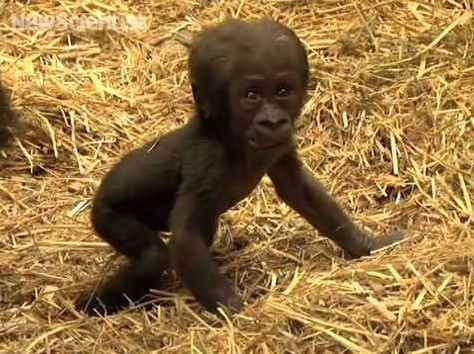 Zookeepers at Frankfurt zoo were delighted to find their resident female Gorilla Rebecca nestling a newborn in her arms last Wednesday. The newborn arrived late night on Tuesday without any complications.

29 year old Rebecca became a mother for the 8th time as she gave birth to the tiny baby. The gender of the baby is yet to be determined as the keepers have not been able to go near enough the infant.

“It looks healthy and feeding well. However, it was not yet possible to know the sex. We are excited about the first child of gorilla-man Viatu and Rebecca,” zoo director Manfred Niekisch said.

13 year old Viatu became a father for the second time since his arrival at the Frankfurt Zoo. In December 2010, his first son Quembo was born who is now old enough to roam independently in the enclosure.

Neikisch added that Rebecca has had two miscarriages and it is therefore very gratifying to see that this pregnancy went through without any complications.  He also added however that the new few days and weeks were crucial for the newborns survival.

Viatu came to the zoo in 2008, from the zoo in Basel. He is the silverback of the group.

The newborn will be dependent on its mother and nursed by her for the next 3 to 4 years after which it may eat plants too.

The number of western lowland gorillas is very critical in their natural habitat because of forest clearing and human settlements. The practice of Bush meat has also reduced their numbers drastically.