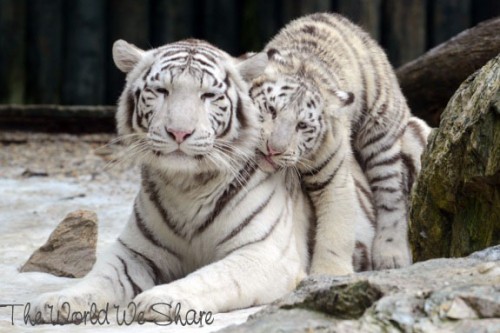 Photographers captured a trio of white tiger cubs and their mother playing in their enclosure at Liberec Zoo, Czech Republic over the weekend.

The triplets; 2 females and 1 male were were born on July 1, 2012 to mother Surya Bara.  After a public naming the little boy was named Samburu and the girls, Gaia and Liam.

Incredibly rare, only 12 white Bengal Tigers have been spotted in the wild in the last century. Today there is a large number of white tigers in captivity. Most survive in captivity because they do not survive long in the wild as they struggle to catch prey because their colouration stands out in the jungle.

A white tiger’s pale coloration is caused by the presence of a recessive gene. Another genetic characteristic makes the stripes of the tiger very pale; white tigers of this type are called snow-white or “pure white”. White tigers do not constitute a separate subspecies of their own and can breed with orange ones.

The playful pics come just a month after one of the zoos white tigers attacked three employees after escaping from its enclosure.

The Liberec Zoo is the only one in the Czech Republic that has white tigers.

At that time, Zoo spokesman Ivan Langr said the tiger named Paris has been tranquilized and poses no further danger. He said the zoo’s employees were shocked and that it was not immediately clear who is to blame for the escape.